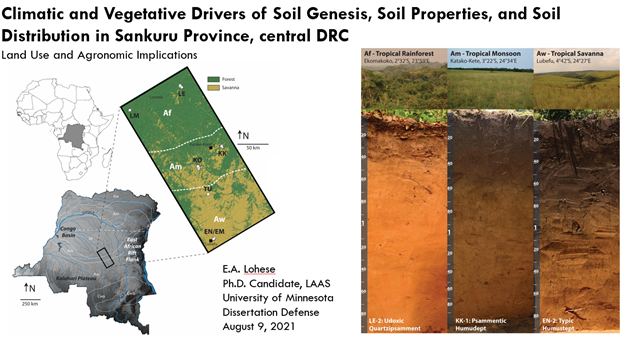 Much of what is known regarding soil properties in the Democratic Republic of Congo (DRC) is based on broad estimates from studies covering only 15% of the vast country’s territory, about a quarter of the USA. Understanding how soil types and soil properties vary across the landscape and change with major vegetation types across climatic zones is a critical foundation that must be established in order to ensure the lasting success of future effort to improve land use, soil health, and food security. In this study, soil investigations were undertaken on a transect across the forest-savanna ecotone in Sankuru Province, central DRC. Soils across the transect were generally sandy, acidic, kaolinitic, and low carbon soils, but significant differences in soil properties and soil classification existed between climate zones and vegetation types. Soils formed under savanna vegetation were characterized by thick, dark colored topsoils (umbric epipedons) and classified as Inceptisols regardless of climate zone, while soils formed under forest vegetation had thin, light colored topsoils (ochric epipedons) and were more diverse, classifying as Entisols, Inceptisols, Ultisols, and Oxisols. Analysis of soil magnetic properties and the δ13C ratio of soil organic matter revealed that while climatic differences are recorded in iron oxide assemblages, it is likely that forest was much more expansive in the mid-late Holocene and covered modern-day savanna sites across the transect. Finally, soil phosphorus stocks vary significantly across the transect and is highest under savanna vegetation in wetter climate zones. These phosphorus (P) stocks exist largely in association with iron and aluminum oxy-hydroxides, but are non-occluded, which may allow P to become available to crops under innovative agronomic management.  These results suggest that by focusing crop production in savanna areas in the Am and Af climate zones, and applying locally available amendments that may boost soil pH and CEC could increase crop productivity and food security in central DRC. 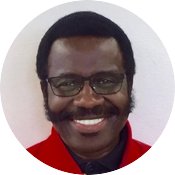